The Sherriff Centre at St James’ Church is a social enterprise organisation. We are a registered charity, The Sheriff Centre Ltd, and a business, The Sanctuary Café NW6 Ltd, which functions as our trading subsidiary in order for us to operate a Post Office, The Sanctuary Café, Hullabaloo and a small stationary shop. Any profits from our trading activities go to fund the work of our charity to provide services to the local community. Our main activity as a charity is our debt advice service. This is an independent, Financial Conduct Authority (FCA) registered service which provides debt advice and support to those facing challenges in their lives. 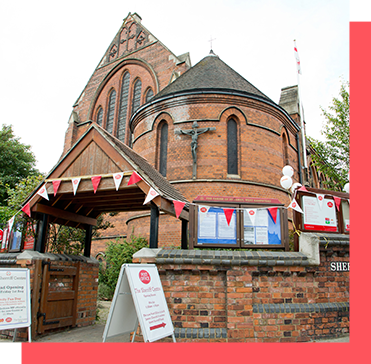 The Sherriff Centre was born out of the desire to retain a Post Office in the area when the post master at the West End Lane site wished to retire and close his branch.

Fr. Andrew, who until the summer of 2017, was the vicar at St James’, saw a tweet from local estate agents Dutch and Dutch who were looking for alternative venues to host the Post Office. St James’ church was suggested and subsequently accepted as a viable site.

The addition of a café, shop and soft play were soon part of the planning process and business model as it was clear from the outset that to ensure its long term financial sustainability our project had to have a wide appeal and varied income streams.

The journey to open was an eventful one, facing both logistical and financial challenges and after many months of business plans, presentations, fundraising and consultations building work started in April 2014.

We opened our doors for the first time at 1pm on 18th July, 2014 and with the church bell ringing out to announce our arrival a new era for St James and West Hampstead had begun!